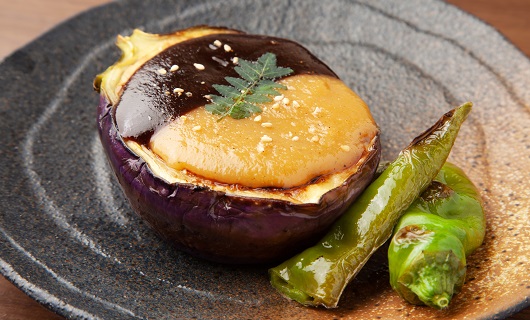 The Kamonasu eggplant is one of the most popular traditional vegetables of Kyoto. It has a round shape with a diameter of over 10 cm, it does not crumble even when boiled, has great appearance and taste that can be described as the "queen of all eggplants". Since the Kamigamo area was a fertile land between the Kamo River in the west and the Takano River in the east, vegetables even other than Kamo eggplant have been produced for a long time. Kamonasu is known to be difficult to cultivate because the number of fruits that can be produced from one plant is as small as half that of other types of eggplants, and the fruits are easily cracked. A typical dish using Kamo eggplant is "Kamonasu miso Dengaku". We propose a dish that allows you to fully enjoy the taste of Kamonasu. 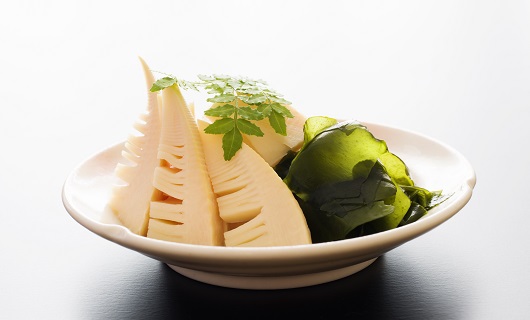 The Japanese bamboo shoot is said to have originated from the planting of Chinese Moso bamboo in the Nishiyama area of Kyoto, which then spread to other parts of Japan. The "Otokuni" area of Kyoto, consists of Muko and Nagaokakyo cities, and has been a transportation hub connecting Kyoto and Osaka since ancient times, and the area name was also derived from "Kojiki" and "Nihon Shoki". In 784, Emperor Kammu moved the capital to Nagaoka-kyo, and the area is also said to be the birthplace of the "Taketori Monogatari"(Tale of the Bamboo-Cutter). The Kyoto bamboo shoots grown in the Otokuni area are characterized by their sweetness, thickness and tenderness. Fresh bamboo shoots can be eaten as sashimi as they have no bitterness. This dish is a symbol of the beginning of spring. 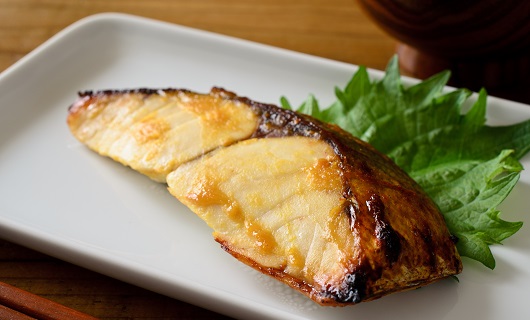 Saikyo-zuke is a traditional dish made by marinating seasonal fish or meat slices in a Kyoto's white miso marinade. Kyoto's white miso was nurtured in the culture of the court and nobility, and is characterized by its low salt content and sweetness compared to regular miso. Originally, Kyoto was far away from the sea, and fish was marinated in miso to preserve the flavor so that it could be kept fresh for a long time. Nowadays, marinating fish in miso has become more meaningful as it brings out the flavor of the ingredients. We are proud to offer a traditional dish nurtured by the history and climate of Kyoto. 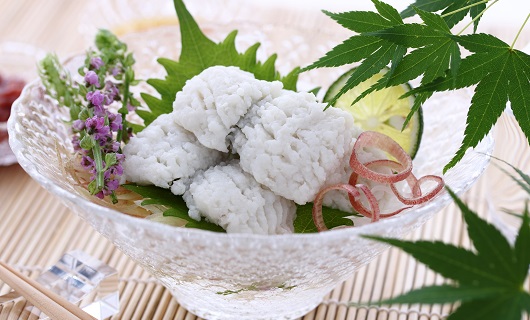 Hamo (conger) is an indispensable fish for summer Kyoto cuisine, especially in the Gion area. It is found in waters affected by warm currents, and several tons are caught in the Tango Sea every year. However, it is said that most of the Hamo eaten in Kyoto comes from the Setouchi Sea and the Genkai Sea. The largest Hamo can grow to nearly 2 meters in length, and the meat is beautiful white with a light flavor. Hamo has many small bones and requires a unique and skillful technique called "bone-cutting" when preparing it, it is even said that "a Kyoto chef is a full-fledged chef when he learns bone-cutting technique". Nevertheless, Hamo has remained as a summer ingredient in Kyoto cuisine because its strong vitality allows it to be transported alive from distant places to Kyoto.